cowens/oldschool wrote:Right bob, those finger rolls and hook shot right over Ibaka and Siakim were amazing!! I remember when Bird had his first 36 point game as a rook and you just knew he was only going to get better and then he surpassed that he got so good....Right now as we all know its a wing dominated league, if I was starting a team Doncic might be my first pick, and I’m basing that on how much better he can still get, scary....

Depending upon the coin toss, either Luka or Giannis.

Me too, I love that kid's basketball ability

Agreed can’t go wrong with Giannis, his rebounding also is really impressive. I don’t know who I would take between Davis and Giannis, I think of Luka more a wing, now he’s actually bringing the ball up, kid is fuckin 19....??? He needs some pieces around him, but all superstars do.

cowens/oldschool wrote:Agreed can’t go wrong with Giannis, his rebounding also is really impressive. I don’t know who I would take between Davis and Giannis, I think of Luka more a wing, now he’s actually bringing the ball up, kid is fuckin 19....??? He needs some pieces around him, but all superstars do.

The freak is simply amazing with his ability to get to the rim even though everybody knows he wants to get to the rim and still he is unstoppable. Davis has more offensive skills and is just as good of a rebounder and defender. Anthony Davis is so good that you do not know what he is going to do until the basket drops through the net.

Davis is the best big man in the NBA. Go check his numbers. Unreal talent.

John Karalis @RedsArmy_John
about 8 hours ago
Not gonna lie... if I was a Spurs player watching this, I'd be pretty afraid of what came next espn.com/video/clip?id=…

bob
MY NOTE:  Is Pop done?  He's known for his brusque interviews but this wasn't brusque vs reporters asking dumb questions, it was against himself and his team.  Remember, he just lost his wife of over 40 years, who died in 2018.

Right one skill Doncic has over him.

He said recently in an interview that he was not sure he would be coaching next year, he looks beat. Time to walk away Pop. His heart is not in it anymore, since his wife died and Kwahi left him in the lurchc

RosalieTCeltics wrote:He said recently in an interview that he was not sure he would be coaching next year, he looks beat. Time to walk away Pop. His heart is not in it anymore, since his wife died and Kwahi left him in the lurchc

Sad he’s still doing a great job, they lost their starting pg in training camp, bunch of new no name pieces, he has been amazing....

Dennis Smith has 13 assists tonight against the Knicks

so much for getting Smith cheap. Triple double tonight with 15 assists.

I think Toronto is catchable.

I think Toronto is catchable.

It’s not over, Raptors making a comeback, 6 point game

I can’t believe Doncic didn’t make the all star team...???

You're correct BobH. I'm with you. 2nd Place is probably about as good as we can do at this point. We've shot ourselves in the foot too many times when those above us have lost for 1st to be on the table. We follow right in suit and gain no ground.

I was hoping for a three-way tie at 19 games in the loss column after last night. 2 out of 3 ain't bad. IND's dropping like a hot potato. 4th should be ours soon. PHI has grown up a bit on their recent 12-game stretch. But they are killing Embiid. If he goes down for any game(s), PHI will sink faster than the Titanic.

Most of the snubs, in the east and west, were the young players.  A notable exception was Jimmy Butler, who isn't young and is already an All-Star.

Digressing, I'll bet this will make Butler think about leaving Philly even more.  He does not seem to be fitting in and this All-Star snub sort of confirms it.  If Philly doesn't make it to the EC Finals, at least, I'm thinking he's going to move to greener pastures.

Victor Oladipo was named as a reserve, but he's done for the year.  This is the league playing games.  It's one thing when the dopey fans vote Kobe Bryant in as a starter even though he was out with his achilles, the league has no control over that, but to name someone an All-Star who barely made it halfway through the season and they know won't be able to play in the game?  It's a freebie, as far as the NBA is concerned.  You can only name 12 players to a team, the 5 starters being selected by the fans, which leaves only 7 spots for the league to use  to give recognition to players they want to spotlight (and hype).  By naming a player who arguably deserves the nod, but will not play, that let's the league to name a 13th player, a player to provide some fan base a reason to cheer.

No skin off my nose either way, I never watch All-Star games in any sport. 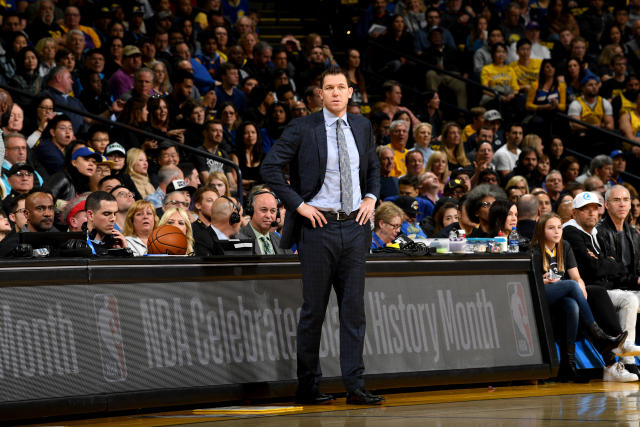 The Los Angeles Lakers have made it clear that they want to trade for New Orleans Pelicans star Anthony Davis.

As next week’s trade deadline rapidly approaches, it seems the uncertainty surrounding the potential blockbuster trade isn’t sitting well with certain players on the team.

Following the Lakers’ 115-101 loss to the Golden State Warriors on Saturday night in Oakland, several veteran members of the Lakers had an “emotionally charged” verbal confrontation with coach Luke Walton in the locker room, according to The Athletic’s Shams Charania.


In the meeting, which was described to Charania as a “heated scene,” Walton “preached to players on playing unselfishly.” That’s when multiple players “snapped back.” Those involved were separated before it escalated further.

According to The Athletic’s Sam Amick, McGee, Stephenson and Beasley were the focus of the “playing unselfishly” message, which they clearly didn’t take well.

@sam_amick
To add on here, I’m told JaVale McGee, Lance Stephenson and Michael Beasley were the focus of this message and they didn’t take kindly - JaVale more than anyone. https://twitter.com/shamscharania/status/1091935190472187904 …


The Lakers have reportedly made a “lowball” offer for Davis already, which included Beasley and Rajon Rondo, among others.

The fight on Saturday wasn’t limited to the trade, however.

Players “raised their voice on topics of Walton’s playing time distribution and rotations,” per Charania.


McGee scored just nine points in 10 minutes on Saturday, and Beasley scored just six points in seven minutes. Stephenson finished with 10 points in 24 minutes. All three of them came off the bench.

The Lakers have gone just 7-12 since Christmas Day — when LeBron James suffered a groin injury. James missed the next 17 games before returning on Thursday, though he didn’t play on Saturday. The loss to the Warriors marked their fifth in their past seven games.

bob
MY NOTE:  The downside of bringing in Ring Wraiths to fill out your team.  If you're not on track for a ring they start to question why they went there and get cranky. Furthermore, they are veterans who aren't used to lesser roles so, if they are going to accept that, it better be worth it in the end and the Lakers are currently in 9th place in the WC. Where is LeBron on this? He's the player-leader, he should either be working the players to calm down, or he's inciting them quietly. Either way, if LeBron doesn't come back soon and they start winning again this will fester and return. If he does, and they do, this will pass.

Lets see if the team fines any of these three players for their actions. Getting physical in any way with a coach should not be okay with team management.
_________________

Wonder how Lebron felt about losing by 42 to a team playing without its best player tonight.

And LA was even favored by 3.

Monroe's lack of defense is allowing Embiid to get the Sixers back in the game. Like a 12-0 run.

steve3344 wrote:Wonder how Lebron felt about losing by 42 to a team playing without its best player tonight.

And LA was even favored by 3.

Game after the confrontation and they get blown out by 42....???

Someone lost that team and it’s not all on Luke Walton. Anthony Davis must be having 2nd thoughts, Kobe was 34 when he tore his Achilles and was never the same, Lebron has never looked more pedestrian as right now, can he get it back, I’m sure, but Father Times never loses and he should be thankful if he never goes to Lakers....

At 37.7% Marcus Smart is shooting threes better than Tatum, Rozier, Brown, Horford and Hayward. The pre-season Vegas odds of that happening would have been quite long I would imagine. Since Jan. 4th he's at 45.7% (42 for 92). Mind-boggling.