Anyone heard how serious Robinson's knee injury is? I haven't been able to find anything on line about it at all.

sam wrote:I think everyone agrees that referees, like the rest of us, definitely aren't infallible. The difference between them and a lot of us is that the great majority of their decisions are made at warp speed. At least now there are controls in place for them to double check some of their own decisions via replay.

For more than half a century, it's been an unwritten rule that teams that play more aggressively tend to get the benefit of calls that could go either way. All teams know that. All teams have the opportunity to try to take advantage of it.

If these refs can't handle warp speed,get rid of them,I'm not saying its the only reason we lost,but I'm so sick of bad calls that everyone can see are clean,so why can't the guys that get paid to officiate get it?Those ticky tack fouls on Ray were bogus too,just like cops have to practice shooting to stay sharp and maintain a certain average,the refs should have their eyes checked every so often and the games should be reviewed and if you blow enough clean calls,there should be a number,if you exceed it,your on probation for a game with no pay,just like if a player gets too many T's he is suspended.....the same should apply to the refs.

Warp speed is pretty fast. I've referred basketball games, and I own an expert medal in military marksmanship; and the former involves far more variables, encountered in a split second than the latter. Very poor example.

If you think eye tests will make the referees less human and more infallible, good for you. It's absolutely incredible how, when the Celtics win (which is much more often than not), I seldom or never read or hear anything about those lousy refs. I guess that means the refs favor the Celtics more than other teams. Stern should look into that. 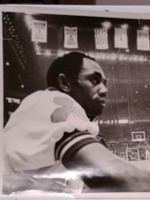 My father was a lieutenant in the Army and the best marksman in his brigade,he didn't have a problem with that.I have seen bad calls in wins too and might have pointed them out.I feel refs should be held accountable,guess you feel different. The calls I questioned were pretty simple,none were charges where angle and timing is so important.On two of the clean blocks I questioned,did not see anything touch but ball and plays like that can lead to fastbreaks that are big momentum changers.Surprised a purist like yourself wouldn't want to get it right. cow

As noted on this website many times, referees are held accountable for the calls that they make. The NBA has an independent group that reviews calls/conduct of the referees. Just because you don't hear about any reprimands or penalties against the referees, that doesn't mean they do not occur. The NBA does not comment or release statements regarding their course of action toward the referees.

Good and bad calls are made against/for each team. The referees do not intentionally make bad calls against the Celtics.

Congratulations to your dad on his achievement. The relative ease with which he accomplished it would support the fact that there's very little comparison between the relative ease of aiming/squeezing and the complexity of refereeing. I appreciate the reinforcement of my earlier statement.

TJ is correct. Referees are held accountable by the league. And, on at least one of the calls you hated, the ref would perhaps be complimented by his evaluators for his good judgment because of something of which you're possibly not aware.

But the forceout rule has been abolished, yet there still has to be some ruling as to why he went out of bounds. The only alternative is a foul in one direction or the other. Clearly Kobe did not foul Ray. So, even though the contact was minimal, it was obligatory that a foul be given to Ray. Perhaps the refs actually know more about the complexities of the rules than we do.

I would think a purist concerning the accountability of referees would want to draw attention to every apparent bad call, rather than selecting only those that go against the Celtics. I think such an exercise would reveal that, for the most part, any deviation from perfection goes in each direction about equally. Although, I still claim that the more aggressive team gets a bit of an edge for a lot of very sound reasons.

As for my approach to being a basketball fan (whether as a purist or whatever), I'm very happy to make my own decisions about that, thank you.

I think it was a bad example,the shooting range,for what ever its worth my point was that law enforcement has to keep their average at a certain standard,I would hope the refs have to keep a certain standard too,and as a fan I see alot of bad calls,especially the no brainers on clean calls.I can see it live many times,then the replay confirms my worst sights that I just saw.....glad they have an independent board,but I see way too many whiffs and on clean plays.

My father used to win all the big prizes and stuffed animals at the carnival,my mom used to tell me they would walk around the next day and the vendors would beg my Dad not to shoot.

.....oh they just called a make up foul on Lebron

Is this the unofficial Game-on-Thread for the Heat game? Don't know about the rest of you, but I'm enjoying the h§ll out of this one!

KG and BBD down low putting it to the heat. Great ball-hawking defense, where is everyone tonight? Too bad, this is a lot of fun.

Does Pierce have the flu? He hasn't hit a shot - 0/7 and we're still only down by four.

No game thread for such a big game?
Pierce is going to have to pick it up, and they should be going into the paint more often. The Heat are a small team

For whose who haven't seen it yet, Matty was kind enough to start a game-on thread. Wow, Bosh got push out of bound and they didn't call it. The refs are favoring the Celtics.

guys there is a Game On go check

sam wrote:For whose who haven't seen it yet, Matty was kind enough to start a game-on thread. Wow, Bosh got push out of bound and they didn't call it. The refs are favoring the Celtics.

Dave Cowens wouldn't think that was a push

Perk walked on that play. Refs are favoring the Celtics, Cow.

Inspired move by Doc, putting Rondo on Wade. Who woulda thunk it?

There is a game thread for today's game? Can't find in on Game On area.

Hey folks....is it me or is there an echo in here. I do not see the Celts-Heat game thread.