Welcome to the Game On! Forum!

Post comments and discuss the game as it happens.
Tips and Reminders:

The liberal use of the F5 - "Refresh" button on your keyboard will keep you current with the most recent post on the thread.


There may also be a half circle with an arrow "button" up on top, next to the internet address. Pick that, it will also refresh the thread to the most recent post.


If you need a way to catch the game, there are some links to online game feeds in the forum entitled “Links, Books, Media”. We do not endorse, promote, partner with or in any way sanction any media player; they are public listings.

Game Preview, box score and (after the game) postgame wrap-up:

BOSTON – After getting tossed around like a rag doll the last time they saw the Memphis Grizzlies, you would think that the Boston Celtics would be thrilled to see them at less than full strength.

But here’s the problem.

Memphis might be the league’s best team at finding a pathway towards success with an injury-riddled roster.

And when the Celtics host them on Wednesday night, the Grizzlies will once again field a lineup that’s missing a few key players.

Former Defensive Player of the Year Marc Gasol has a foot injury that will keep him sidelined for the rest of the season. Point guard Mike Conley, arguably the best playmaker in the NBA not to be named to at least one all-star game, is out with a foot injury. And recently acquired Chris Andersen will be sidelined with a shoulder injury. If that’s not enough, the status of Zach Randolph (back) and Matt Barnes (hamstring) is a bit uncertain as well.

On the surface, it would appear the Celtics (38-26) are well-positioned to just show up and take care of business against a significantly wounded Memphis team.

But the Celtics know regardless of who shows up tonight, the Grizzlies are going to give them a fight. The Cleveland Cavaliers found that out on Wednesday when Memphis, minus four starters, went into Cleveland and came away with a 106-103 win.

“Every team on any given night is capable of coming in and beating you,” said Boston’s Marcus Smart. “You have to be prepared no matter the record. Everybody is here because of what they can do. You have to come out and play from the start.”

And while much has been made of what the Grizzlies are missing, Celtics head coach Brad Stevens is more consumed by the players Memphis will have available.

“If you take teams for granted that have (former Celtic) Tony Allen, Vince Carter, (Mario) Chalmers, Zach Randolph, Matt Barnes … you haven’t been watching basketball for a while,” Stevens said. “We have to play well to beat those guys. They’re very physical, very long, and very big. They physically manhandled us last game.”

When the two squared off in Memphis on Jan. 10, the Celtics pulled ahead by as many as 21 points before the Grizzlies rallied for a 101-98 win. Randolph led the way with 25 points and 13 rebounds, one of the keys to Memphis’ size simply overpowering Boston in every way imaginable that night.

“We just let them punk us, and they did,” Boston’s Jared Sullinger said following the loss that was fueled in part by Memphis out-rebounding Boston by a decisive 58-39 margin.

And if the memory of that loss (the biggest comeback victory for Memphis this season) doesn’t serve as enough motivation, knowing how well this Memphis team plays when undermanned should be just what the Celtics need in order to come out focused tonight on extending their strong play at home.

“This is a team that’s won regardless of who has been on the floor, pretty much all year,” Stevens said. “It’s a credit to them.”

Besides, the Celtics know they are not at a point in their growth where they can take any team for granted.

“If you don’t respect the game, you don’t win,” Stevens said. “We have to play well to win. We can’t be focused on all the things we can’t control. We have to defend the right way; we have to share the ball. Otherwise, we’ll get beat.”

Just as the Celtics have had different players step up when the opportunity has presented itself, Memphis is a kindred spirit along those lines.

“Anytime that guys aren’t available, they’re usually being replaced by someone who is awfully hungry to play well,” Stevens said. “And that’s enough in this league with this level of talent.”

The game is on ESPN, and I'm in San Francisco and not San Carlos, so I won't be posting much so much as checking in.

No Conley, no Gasol no Randolph no excuses. This is a game we must win 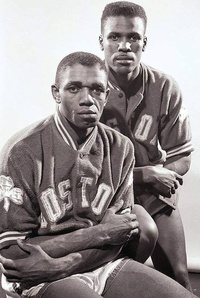 Ktronic1 wrote:No Conley, no Gasol no Randolph no excuses. This is a game we must win

Ryan Hollins is their starting center. I don't want hear shit about how our frontcourt sucks. NOBODY sucks THAT bad.

Ktronic1 wrote:No Conley, no Gasol no Randolph no excuses. This is a game we must win

Ryan Hollins is their starting center.  I don't want hear shit about how our frontcourt sucks. NOBODY sucks THAT bad.

That's it guys. Just stand around and watch Memphis hustle

For a lousy quarter we are ok.

If we let that Lance Stepheson person get off I'M going off.

No Mike and Tommy tonight means it's that dreaded ESPN halftime show. Think I'll head to the store then.

What a poor show of effort out there this half. C's really pissing me off

I walked 3 blocks to move my car, walk back and 2 points had been scored.

Such poor D and no rebounding at all.

No rebounding. None. Nada. Zippo.

Evan makes me proud to be an OSU fan.

Awful 1st half vs a D league front court.

Smir, such a disappointment.

Another disappearing act by Amir.

Anthony Davis would look better in a Celtics uniform than in an H&R Block tv ad.

Boy did that suck. Down 3 to 9 rotation guys. And NO Ryan Hollins! Geez

Guess I'll stick with ESPN halftime since Chauncy Billups one of my all time favorite players is on the show.