What To Do With Hayward's Disabled Player Exception?

What To Do With Hayward's Disabled Player Exception?

I think it's reasonable to assume the league will grant the Celtics a Disabled Player Exception (DPE) for Hayward.  It would be for $8.4M.

Q: What is a disabled player exception?
A: The DPE is an exception to the salary cap like any other exception (mid-level exception, room exception etc.) Teams can apply for it when they believe they have lost a player to a season-ending injury and could use additional resources to pursue a player replacement.
Q: What is the process like for a team when applying for a DPE?
A: Any team can apply for the DPE up until January 15th of the NBA calendar year. A player’s medical information is submitted and examined by an independent doctor that is approved by the league. Said doctor evaluates the player’s medical information and (if needed) can examine a player and the specific injury. At that point, the doctor makes a determination on whether said player is more likely than not to miss the remainder of the NBA season (June 15 is used as an end of season date since it’s the end of NBA Finals). If the doctor believes it is substantially more likely than not that the player will miss the season, a team is granted the DPE. Otherwise, the application is rejected.
Q: What if a team disagrees with the doctor’s findings?
A: The player’s association has the right to appeal any ruling found by the independent doctor approved by the NBA. In the case of an appeal, a neutral physician, who is agreed upon by the league and the player’s association, examines the medical information and makes a ruling on the criteria. This ruling cannot be appealed.
Q: Can a team re-apply for the DPE if they are initially rejected?
A: Yes, a team can re-apply 90 days after their first application if there has been a new development with an injury. This would be useful in an instance where Hayward perhaps suffered a setback in his rehab and his recovery timetable was pushed back considerably from the original estimate.
Q: How long does the DPE approval process take?
A: League sources told Bostonsportsjournal.com that the time varies depending on the specifics and complexity of an injury case, but it’s usually a matter of days or a week after the application is officially submitted that a determination is made.
Q: If the DPE is granted to the Celtics, would that rule out the possibility of Gordon Hayward returning this year?
A: No. If Hayward returns ahead of schedule, he would be allowed to play, even if the Celtics had already used the DPE to acquire a player. Additionally, the Celtics could still continue using the player acquired by the DPE while Hayward played. They would need to forfeit the DPE though if it was unused before Hayward returned.
Q: How much would a DPE be worth for Hayward?
A: A DPE for Hayward would be worth the non-taxpayer mid-level exception, which is equal to $8.4 million.
Q: Can the DPE be used on multiple players?
A: No, it could only be used one player via trade, free agency or claiming a player on waivers.
Q: Are there any other restrictions on the DPE?
A: It can only be used on a player in the last season of their contract (if acquiring a player via trade or free agency). It also must be used by March 10th of the NBA season.


So, who could we use this on?  Who might be possible trade targets given that it must be for a player in their last contract year?  Here's a few names I've come up with.  I used the ESPN NBA Trade Machine, http://www.espn.com/nba/tradeMachine, to sanity check the $.  I used the contracts of Jaylen Brown, Yabby and Semi to simulate the impact of the DPE.  I AM NOT SAYING WE SHOULD TRADE THESE PLAYERS, I'M JUST USING THEIR CONTRACT $ TO SIMULATE THE DPE BECAUSE THEY TOTAL $8.495M.

1.  Greg Monroe, Bucks.  Salary $17.9M.  Marcus Morris ($5M) would be included in the trade with the DPE.  Milwaukee has been shopping him for a while.

3.  Kentavious Caldwell-Pope, Lakers.  Salary $17M.  Morris included.  They give us a pick for this.  Hard to help Lakers when we own their pick.

5.  Corey Brewer, Lakers.  Salary $7M.  Could be straight up using DPE, doesn't need another player for the $.


Here is the list of players' contracts.  Remember, only players in their final contract year are eligible for acquisition using the DPE.
https://www.basketball-reference.com/contracts/players.html

Too me sitting tight and getting more PT for the kids is a better option.

Getting a good player might help us win games this year...but this year we aren't winning the big prize anyway. SO I'd pass on any trade and only pick up a free agent if one falls in our lap.

I think that Ainge should apply for the DPE as soon as possible.

He need not use it right now but should have it in his bag of tricks just in case some player of quality happens to show up as available.

Some of the players on the list in Bob's post are interesting, but each may be too costly as far as players go off our current roster. I doubt that the Jazz dump Favors in our lap without getting back a rotation player and at least one number one draft pick.

beat wrote:Too me sitting tight and getting more PT for the kids is a better option.

Getting a good player might help us win games this year...but this year we aren't winning the big prize anyway.  SO I'd pass on any trade and only pick up a free agent if one falls in our lap.

I agree. Apply for the exemption and sit on it until much closer to the trading deadline. We haven't had enough time to discover our actual weaknesses, specifically against the actual teams that are going to the playoffs. Then the team management can better fill in the gaps.

There will also be more to pick from after the calendar turns.

Too soon to know what we really need.

Agree that we apply and then wait and see.

We may be getting such rapid development out of Brown and Tatum that the whole picture is going to change.

For the record, I never said WHEN Danny should make these deals.  He needs to make them before March or lose the DPE but anytime before that is ok.

Any deal that involves Morris, however, would probably happen because Brad and Danny don't see him being with us long-term anyway so he's going to move him.  That may not be the case at all.

Then there's the question of chemistry.  If Morris is coming off the bench would Favors, for example, be willing to do that too?

You may be right, but I see nothing here that says that explicitly.


HOWEVER, I found this on Celticsblog (which makes it less official than nba.com):

"The most important thing to note is the DPE can be used on just one player. No splitting it. No combining it with another exception or another player’s salary or cap space to take in anything more than $8.4 million. You get one shot to use it and that is it."


Here are some ideas for trades from Celticsblog, some of which they discount because of our roster needs:

I thought we discussed this before and it was pointed out that is cannot be combined with other assets.

has to be a single player, on final year of his deal with a salary at or below the exception?

so the question then becomes why does a team want to trade the player away for nothing but cap space and $8M or less in salary?

more likely to be used to sign a FA somewhere, IMO.


are a few of the retreds still looking for a job.

all played in the NBA last season.

other Euro player who's name could come up is Jan Vesely and Luigi Datome....for those who remember either one. 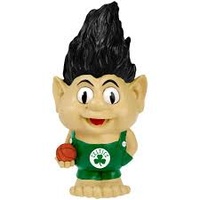