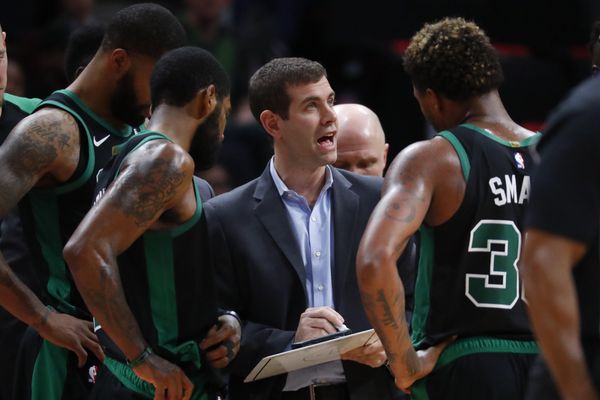 Boston Celtics head coach Brad Stevens calls a play during a timeout in the second half of an NBA basketball game against the Detroit Pistons in Detroit, Saturday, Dec. 15, 2018. (AP Photo/Paul Sancya) (Paul Sancya)


For a few weeks at the beginning of the season, the Celtics offense ran like five people trying to put a piece of IKEA furniture together from memory. It was sloppy, things didn’t fit, and in the end it looked nothing like anyone expected.

A lot has changed since then. The Celtics offensive rating has gone from 27th to 10th overall and is second in the league over the past 15 games. Their December field goal percentage was five full points better than it was in October. Their 3-point percentage is was four points better. Their free throw shooting was seven points better.

It’s not perfect, but Brad Stevens says the team is starting to catch up to expectations.

“Probably not too far from what I thought,” he told reporters at practice Sunday. “Our offense has been good in the last two months. We’ve had moments defensively where we haven’t been. I think when we come back to full health, that will be a positive, but at the same time, I’m more encouraged than discouraged. The record being what it is, I think we’ve got a lot of room to still improve, but we also have shown that we can do a few things.”

Those few things really started clicking when Boston moved the Marcuses Morris and Smart into the starting lineup. According to Cleaning The Glass, the Smart-Morris-Kyrie Irving-Jayson Tatum-Al Horford lineup is +14.2 in 278 minutes together. It has now become their second-most used lineup, and the Celtics have an offensive rating of 117, which would currently lead the league by almost four points, since making the switch.


The two guys who moved to the bench, Gordon Hayward and Jaylen Brown, have also been taking steps forward over that stretch. Brown, a popular target during Boston’s early struggles, has slowly found a groove in his new role. Over his last 14 games since December 1, he’s shooting 49.3 percent from the field and 37.8 percent from 3-point range.

“Everybody’s going to go through those slumps, until you come out of them," said Stevens after the win over Dallas on Friday night. "He’s come out of his well, and has really strung together a good couple of weeks of basketball, and we’re going to need him to continue to be that for us.”

Hayward’s new role has taken some of the pressure off of him as he continues to come back from his injury, but he’s also been getting healthier.

“I think it’s slowly getting there,” Hayward said after the Celtics beat Minnesota last week. “Like, I think my lateral movement, it’s so much better since the beginning of the season. But I think that’s pretty close to where it was. I think vertically I still have a little ways to go. My ankle is a little sore right now. But I think in April and May it’ll be better than it is right now. I’m still doing stuff for my ankle every day, trying to get it better ... it’s the nature of the injury. It’s getting better.”


Injuries have prevented the Celtics from reaching their full potential even after their recent offensive success. Irving, Morris, Horford, and Aron Baynes have all missed games during this stretch. Still, Boston’s depth has come through.

“It seems like we’ll never be fully loaded, or if we are it’s only like one or two games," Morris said after practice on Sunday. "That’s why we’re so talented all around, because you know when guys go down, we have guys that are more than capable or coming in and stepping in and playing starter’s minutes and basically being a starter. We preach that all year, and even when guys are out we still have no doubt that the other guys are going to get it done.”

Boston has an opportunity to improve even more offensively now that Irving is likely returning for Monday night’s game against Brooklyn. Morris is close to a return as well, and Baynes is probably a couple of weeks away from rejoining the team.

The question now is whether the Celtics can handle having everyone back in the lineup. Part of Boston’s early struggles was the inability to find the minutes for everyone who deserved them. A silver lining to recent injuries is that a player struggling to get going in 20 minutes can play more freely when he get 35 minutes.

“It’s probably harder when we have everybody, because everybody can’t shoot," Morris admitted Sunday. "Everybody can’t get the amount of minutes they want. It’s just a different feeling when you’re out there comfortable and you’re playing the amount of minutes you want and taking the shots you want. I mean, that’s for everybody around the league. It’s just a different feeling.”

“When you know your time on the court is unlimited until you wear out it’s an easier way to play,” said Stevens." And that’s why I think it’s so important for us as coaches and everybody around to understand the guys that are playing less or playing more sporadically, that’s really hard to do to be as effective as you are when you are getting unlimited opportunity.”

“It’s something where guys know they have to step up a little bit,” Hayward said after the Dallas game. "But also, like I said, there is more opportunity, so more responsibility for people. When we’re full strength, it’s different, because there’s so many of us that can make plays that they might not be in that situation.”

The Celtics have fought hard to catch up to their expectations, which is critical as they reach the halfway point of the season this week. Now is the time for teams to figure out who they are, and Boston is finally showing they can be pretty good offensively.

Re: Brad Stevens says the Boston Celtics offense is close to what he expected at this point of the season

Hope Morris enjoys this season, I don’t see him coming back next year, but I’m sure someone out there can use him.