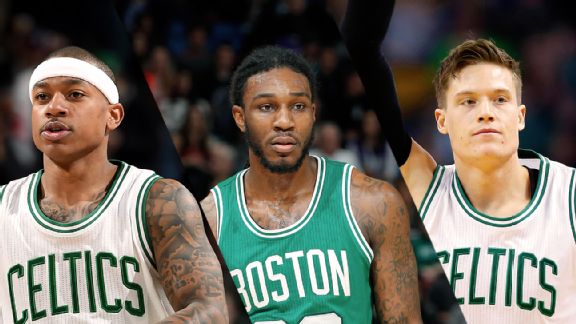 WALTHAM, Mass. -- Former Boston Celtics coach Doc Rivers used to playfully refer to it as "coaches' pornography." Whether it was textbook execution or simply making scrappy hustle plays, there are few things that get coaches more excited than watching their players make quality basketball plays.

For Celtics coach Brad Stevens, there was a moment late in Friday's rally against the Charlotte Hornets that really stuck with him. Boston, leaning on a small-ball lineup, had come back from 16 points down and was clinging to a one-point lead with little more than 2 minutes to play when newcomer Jonas Jerebko's hustle created an offensive rebound.

Fellow newcomer Isaiah Thomas reset the play at the top of the key, then created immediate havoc by accelerating off a high pick-and-roll and getting into the paint. He sent a bounce pass to Jerebko in the corner and, when his man came rushing out, the 6-foot-10 big man put the ball on the ground and attacked the paint himself.

The Hornets' defense was completely discombobulated from the movement and paint touches and Jerebko kicked the ball back out top to a wide-open Jae Crowder for a 3-pointer that helped Boston score the game's next nine points and emerge with a 106-98 triumph.

For the better part of the past 20 months, Stevens has endured an offense that struggled to consistently generate points, particularly in crunch-time situations. Even when Rajon Rondo was healthy, the Celtics struggled to consistently get in the paint and create havoc off the pick-and-roll. But that's exactly what Thomas has thrived at since arriving last week and, what's more, he's excelling the past two games with undersized lineups heavy on shooting, especially with in-season acquisitions like Jerebko and Crowder.

Over the past two games, that Thomas-Crowder-Jerebko trio has shared the floor for 28 minutes. Boston's production in that span: 55.6 percent shooting overall (30 of 54), including 57.1 percent shooting beyond the 3-point arc (16 of 28), plus-37 in plus/minus while outscoring opponents 89-52 overall.

While it's a small sample size, it's the per-100 possession numbers that hammer home just how efficient that unit has been. For the season, the Celtics rank 21st in the NBA with an an offensive rating of 101.4. That Thomas-Crowder-Jerebko unit owns an absurd offensive rating of 157.2 over the past two games.

In the four games since Thomas' arrival, the Celtics own an offensive rating of 117.9 when he is on the floor. The number jumps to 125.5 when Jerebko is on the court. It's still at 117.2 during Crowder's floor time.

The real secret for that lineup, however, has been its ability to defend beyond its size. Stevens admits he was throwing darts earlier this week when he went small with Jerebko and Crowder serving as the power forward/center combo.

Jerebko has rarely been regarded for his defensive abilities, but he's utilized his athleticism and energy to be competitive. Crowder is built like a brick wall and has embraced the challenge of guarding bigger opponents, which included jousting with Charlotte big man Al Jefferson at times on Friday night.

"[That lineup thrives because they] are able to manage their size on defense," said Stevens. "Because, offensively, they are going to be hard to guard. No matter how you guard, that’s a hard group to guard because it’s skilled, you’ve got a great penetrator, and you have guys that can put the ball on the floor against closeouts."

Boston has connected on 14 3-pointers in each of their last three games. Credit Thomas, who has been a revelation, showcasing just how much Boston needed a point guard that could attack in the pick-and-roll and create both for himself and the shooters around him.

Thomas has helped bring the best out of teammates like Crowder and especially Jerebko, another trade deadline acquisition.

"I think [Jerebko has] been good on both ends," said Stevens. "I’m not all that surprised. I thought he was a game-changer in a couple of our games against [Detroit] last year. When they got in foul trouble and went to their bench, I thought he made huge plays against us and really hurt us. To come out one night and give 20 [points], then the next night give 16, and fit in as well as he has, it’s a positive. Again, it’s a unique position because he’s been guarded mostly by bigs, by 5s. That’s probably a little bit different for him, too, but that’s an advantage on one end of the floor."

With Boston's frontcourt decimated by injuries, Crowder has carved out a major role as the 4 in small-ball lineups. Stevens has gushed about the mismatches that has created offensively because Crowder can guard bigger players.

"Well [Crowder is] strong, that’s No. 1," said Stevens. "He’s strong, he gets in a stance, he does his work early defensively, and he’s very, very, very competitive and prideful. And you can tell that. Him against Al Jefferson every day is not going to work, but I’ve always thought -- at least the guys that I’ve coached -- the toughest of the tough could guard anybody for a possession. Or could guard anybody for a couple of minutes. And they kind of get excited about that, and that’s a good description of Jae. Jae wants to guard that guy. Like he wants to take on that challenge and see if he can. And I think you get a guy like that, that helps, and then his ability to stretch it on the other side of the floor is what makes it work."

The Celtics are taking great pride in forcing teams to adjust to their small-ball lineups. Charlotte tried to stay big at times, but Boston exploited their advantages at the offensive end while simply playing scrappy on defense, which created a lot of turnovers.

Stevens rode the Thomas-Jerebko-Crowder lineup for much of the second half on Friday with Boston's starters content to play cheerleader from the sideline.

Is it sustainable? Stevens is going to ride this new bench Big 3 as far as they can take the team.

"Well, with a two-game sample size I would say it’s been good, but I don’t know that we can determine if it’s good long-term or not," said Stevens. "I think that the biggest thing for me has always been, if you can find somebody with enough speed and skill that can guard above their size, then you can create some havoc on the other side of the court. And that’s what Jae has done. Jae’s ability to guard the post has given us some options as we’ve been smaller here, and Jonas too."

bob
MY NOTE:  Ok, when Jonas came he was billed as a "physical, defensive player".  Now ESPN is saying that he was never known for his defense.  I think I'll just watch the games and decide for myself. Furthermore, while I'm not taking the time to make verify this, I think the offensive numbers quoted in another article are not the same ones quoted in this one.

The "Big Three" moniker has become a caricature of itself.  For one thing, the three names players are vulnerable to a team like the Warriors that can answer their agility and shooting with agility and shooting of their own.  The three named players constitute a bench nucleus; but it take five guys to make a winning combination.  I don't believe James Young is ready to be part of that combination; and I feel that replacing him with Turner or Bradley or Sully or Kelly would very possibly have eventuated in a Celtics win.  I hate to blame a rookie, but I don't think he's being integrated in the right way, which should be more gradual and skewed more toward the first half than the stretch run of games.