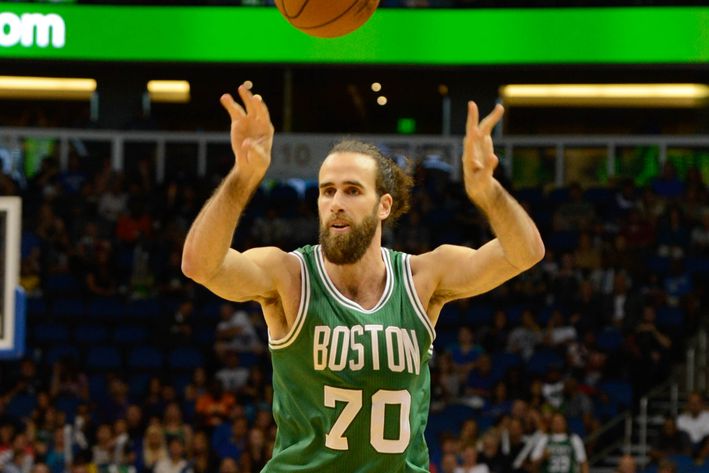 Tommy Gilligan-USA TODAY Sports
Before last night's game, Tyler Zeller asked Gigi Datome what he did in his free time. Datome replied, "read books." On the floor however, Datome and the Celtics are learning to read defenses and now they're squarely in a playoff hunt after a five-game winning streak.


"Nice basketball."  That's how Datome described last night's throttling of Philadelphia and Boston's team play over their current five-game winning streak.  "Nice" and "fun."  Yes, last night's blowout win was against the hapless 76ers, but even in such a lopsided game, you can see what Datome's talking about.

Datome played 255 minutes in Detroit over a season and a half, racking up more DNP's than made shots, but before signing with the Pistons, Datome was an accomplished player abroad.  He was an MVP in Italy and did stuff like this.  He never found a niche with SVG or Mo Cheeks, but in his brief stay in Boston, he's proven that he can play in this league, and more importantly, for this team.

The Celtics are playing beautiful team basketball and Datome's recent surge is a testament to how quickly a player can be assimilated into Boston's system.  The bottom line is that if you can play, you'll play.  A few days ago, Brad Stevens talked about "playing the right way" and said:

"To me that approach is tried and true. You do your role as well as you possibly can, and become a superstar in that role," said Stevens. "You give it everything you've got for the good of the team, then good things usually happen. Certainly it's tough to lose, and losing can have a snowball effect. But our biggest thing is to continue to play well."

Stevens emphasizes the word "role," but he doesn't mean it in the traditional Doc Rivers' sense where Rajon Rondo played the point guard role and Ray Allen played the shooting guard role.  At least, I don't think so, because the way the Celtics are playing right now, there doesn't seem to be any roles.  Everybody touches the ball and everybody makes decisions on the fly.  It's the positionless basketball that Stevens has been preaching since day one of  training camp and we're seeing the benefits of the read-and-react system at work.  Stevens has been getting a lot of credit lately, but the simple truth is that he's allowing his players to freelance on the floor and putting them in position to utilize their own skill sets and natural instincts to make decisions.

This is is one of Boston's most popular half court sets: a big dribbles hard toward the sideline with a wing above the break and beyond the arc and another wing flashing up from the corner.  It's an unconventional trigger with your center handling the ball so far away from the basket, but defensively, it pulls the opposing team's shot blocker away from the rim and creates lanes to the rim.

This is why Brad Stevens puts such importance on skilled big men that can shoot and put the ball on the floor because adding one element to one player's game has exponential value to the team's offense.  Here, Tyler Zeller fakes the dribble hand off to Avery Bradley.  Bradley cuts hard and clears his man to the opposite corner.  Zeller's next option is another dribble hand off to Evan Turner, but because Nerlens Noel gambles on the tip steal, Zeller reads the play and drives straight to the rim for an easy lay up instead.  He used a similar move on Saturday to help seal the win against the Pacers.

Later in the quarter, Brandon Bass served as the big trigger.  With the more athletic Thomas Robinson back pedaling and protecting against a cut, Kelly Olynyk reads the defense and decides to down screen for Jae Crowder.  Olynyk's pick is very effective against Crowder's defender, Robert Covington, but to finish him off, Bass sets another after his dribble hand off.  Crowder then has plenty of room to hit the mid range jumper.

Remember Zeller's drive in the first quarter?  Noel doesn't gamble this time and stays home against TZ.  Marcus Smart makes the hard cut into the paint.  The dribble hand off screen gives Bradley enough space for a single rhythm dribble and hop and AB hits the wide open three.

Bradley was on fire last night (4-for-7 from downton) and it's all net, but notice the subtle action that happens under the rim: Smart sets a cross screen for Bass, Bass sees that Avery is shooting and now has a chance for an offensive rebound against a smaller defender.  Had Avery not pulled up, Bass could have set a back screen for AB to drive right with Zeller clearing out Noel.

And now, let's come full circle because a recap of last night's action wouldn't be complete without a Gigi Datome highlight.  Jonas Jerebko dribbles to the sideline and Bradley makes the crisscross cut.  It's another dribble hand off for Datome, but for some reason, Covington (Datome's defender) gambles on the steal.  Datome reads this and lets him fly by.  He receives the pass from Jerebko, pump fakes and freezes Jerami Grant, pass fakes and freezes Covington, and has a clear path for a 2-on-1 with Zeller.  Henry Sims didn't have a chance.

bob
MY NOTE:  For those who got a little confused, like I did, the .gifs precede the narrative.  First the .gif and then he talks about it.  I kept thinking he'd tell me what he's going to show me first and I'm watching the .gif and thinking "WTF is he talking about?". What I like most about the Gigi highlight is that when he saw the lane to the rim open up he not only took it, he took it ALL THE WAY to the rim. The pass to Zeller was heady but Gigi's willingness to drive it down their throats and not pull up for a short jumper is what made me quiver with delight.

Last night, GiGi made a play I thought was phenomenal.  It was a totally individual play, but it was also the only option (barely) available to him.

He appeared headed toward the rim, but (with the help of the 76ers), he lost control of the ball, and it bounced toward the left sideline.  He tracked it down and turned and shot in the same motion.  Nothing but net.

At a certain point, it becomes irrelevant which player is the best shooter on a team.  It's just nice to have multiple players who can fill it, even with high degrees of difficulty and from various spots on the floor.  GiGi must be in the discussion of pure shooting talent on the team.

sam wrote:Last night, GiGi made a play I thought was phenomenal.  It was a totally individual play, but it was also the only option (barely) available to him.

He appeared headed toward the rim, but (with the help of the 76ers), he lost control of the ball, and it bounced toward the left sideline.  He tracked it down and turned and shot in the same motion.  Nothing but net.

At a certain point, it becomes irrelevant which player is the best shooter on a team.  It's just nice to have multiple players who can fill it, even with high degrees of difficulty and from various spots on the floor.  GiGi must be in the discussion of pure shooting talent on the team.

I thought Gigi's 25'+ pass to Crowder underneath was pretty good too.  Possible point forward?  Given Brad's heavy use of Turner in that role he isn't a traditionalist.

One thing is true and that is that Gigi is loving his current situation.  He went to Detroit because he wanted to prove he could play in the NBA.  He never really got a shot there which, for a 12 year veteran player with numerous accolades in his last league, must have killed him.  I don't know what kind of money he'll want next year but I'll bet he gives Danny a "hometown discount" so he can stay here.  After purgatory in Detroit (is that redundant?) this is about as good as he can reasonably expect it to be for him.  He's getting minutes to show what he's got, the crowd is toasting him as a cult hero and Brad lets him be himself.  There is even a chance, depending upon what happens with Turner, to earn a starting slot if Brad likes Jae's energy off the bench.  Even if not, he stands to become a regular rotation player.

I've been hoping Brad might give GiGi a try at SF on the offense-challenged starting unit.  Crowder's obviously better as part of the shock troops coming off the bench.  In my eyes, he's sort of a wasted corner decoy as a starter.