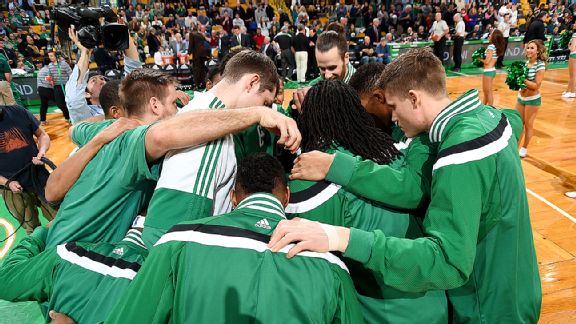 BOSTON -- Boston Celtics coach Brad Stevens was drawing up a play earlier this week when he stopped briefly during the timeout to examine the faces seated in front of him.

"I write the initials on the board -- I don’t do like 1 through 5 [positional shorthand] when I draw up the play," explained Stevens. "We’re 22 people in and these initials -- I gotta clear my mind and make sure I get the initials right on the board."

The Celtics have already tied a team record set in 1949 by utilizing 22 different players during the 2014-15 campaign and they've had a preposterous 40 total bodies on the roster overall. Stevens admits now that he was probably a bit selfish when he pleaded for roster stability before the trade deadline, but that didn't stop president of basketball operations Danny Ainge from delivering three new faces.

Make no mistake, Stevens is thrilled with the early returns from newcomers like Isaiah Thomas and Jonas Jerebko. The constant change has simply left Boston in a most unique situation as the team balances the integration of new players, the development of a young core, and a rather improbable quest for a playoff spot.

After rallying from a 16-point deficit over the final 18 minutes of Friday's rollicking 106-98 triumph over the Charlotte Hornets, the Celtics have now shuffled into a virtual four-way tie for the eighth seed in the Eastern Conference with 27 games to play.

While Stevens is quick to point out that Boston (23-33) is 10 games under .500 and not exactly "setting the world on fire," the Celtics are certainly heating up after winning seven of their last 10 despite a roster that's been in constant flux. The Celtics' most recent additions have reinvigorated the team in recent weeks, allowing Boston to fight on despite losing Jared Sullinger to a season-ending foot injury, this after trading away maybe its two most talented individual players earlier in the year in Rajon Rondo and Jeff Green.

They've found a new hero in 5-foot-10 Thomas, who joined forces with 6-foot-10 Jerebko to bookend a small-ball lineup that rallied Boston on Friday night. Jae Crowder, himself a midseason acquisition who was part of that same spark-inducing lineup, was told jokingly after the game that he was ruining the front office's plan for a glitzy lottery pick.

"I’m sorry. I’ll apologize to Danny right now if that’s what they were trying to do," said Crowder. "But I’m a winner. He brought me here; I like to win games. I’m a basketball player, I don’t know how to just lay down and lose. I don’t agree with that."

Neither does Stevens, who has implored his team to focus on daily improvement and embrace the potential playoff push that a head-shaking Eastern Conference has offered his team.

"I still think we have a lot of room for growth and we've got to get a lot better, there's not question about it," said Stevens. "But we approach improvement the right way, and that's big. That's not just the new guys, that's the guys that have been here... everybody has approached it the right way and stayed pretty even-keeled through all the results." 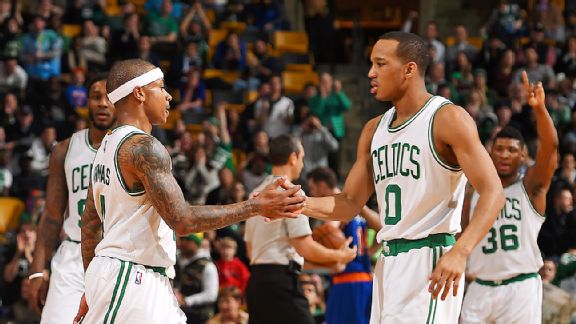 Brian Babineau/NBAE/Getty Images
Isaiah Thomas has provided a spark since arriving in Boston.


GETTING THE NEW GUYS UP TO SPEED

Thomas has an iPad sitting inside his locker stall, one that the team updates each night with new clips to examine and new plays to learn. In this era of digital playbooks, it travels with him most everywhere he goes with a goal of accelerating the learning process -- not that anyone in Green is arguing with his performance on the court thus far.

Thomas scored 14 of his team-high 28 points in the fourth quarter of Friday's game, relentlessly attacking the Hornets' defense as the Celtics chipped away at their deficit. Boston is 3-1 since he arrived, the only game it has lost being Sunday's tilt with the Lakers in which Thomas was ejected in crunch time.

Thomas and the new faces are learning on the fly and Stevens has leaned on his support staff to help them get comfy quick.

"I can’t give enough credit to [head video coordinator Kwame Graves], [assistant video coordinator] Brandon [Bailey] and [video assistant] Matt Reynolds for all the extra work they’re doing on video to help us all -- myself and the assistants -- all to get these guys up to speed," said Stevens.

He added: "Our video guys -- they are always the most important guys, but they are really the most important guys this week, because they are doing all of our breakdowns for our team, they are doing all of our video work for getting ready for the opponent,and by the way, they are creating new playbooks on offense and defense for the newcomers. Which, luckily, we’ve only had to update [often] because we [change] them about every three weeks. So at least they were ready. But that’s a lot of extra work."

The Celtics didn't hold a full-team workout on Thursday, but when a reporter suggested to newcomer Jerebko that the team didn't have a workout scheduled, he laughed and corrected him, "Oh, no, we're practicing." And Boston's new faces went through a lengthy teaching session.

The Celtics don't have more than one day off between games until April 6. They will play 21 games before that point and will have only five regular-season games remaining when that multiple-day break finally arrives. Stevens isn't sure how much the team will practice moving forward -- they'll squeeze in an offday session Saturday -- and said the team must still find ways to get the new players up to speed on the fly.

The handful of players that have been here since the start of the season have taken the roster makeovers in stride and, maybe it's the recent success, but there's an extremely positive vibe in the Boston locker room.

"I think we’ve done a great job of just kinda bonding together and trying to play hard, and, when we mess up, trying to cover for each other," said center Tyler Zeller. "It’s a great group of guys and a group of guys we can rely on to play hard every night."

Stevens admits it's a small relief to know this is likely the roster the Celtics will end the season with (though he knows there's always potential for a back-end roster shuffle). His No. 1 focus right now -- as it has always been -- is on the continued development of his players, but he hasn't shied from a desire to make the playoffs.

"I’m really happy that Gigi, Jonas, and Isaiah are here. It’s more work for us, but it’s enjoyable work to try to figure out how this group can play its best together," said Stevens. "That’s what you try to figure out with every group. I don’t know if we’ll be able to assess progress a whole lot, because we’re only together eight weeks, but hopefully we can extend that [into the postseason] and maybe we can feel really good about that."

Most coaches suggest their teams are oblivious to playoff standings, but Stevens has maintained that tasting the postseason should be a goal that any young team strives for. He's trying to instill a culture of winning and a potential playoff push would help his team whether the Celtics made the postseason or not.

"You know what’s going on [with the playoff standings]," said Stevens. "The bottom line is, none of that matters with however many games we have left unless you play well. And for us it’s about playing well. We’ve said this all the time, it doesn’t matter who we are playing, if we don’t play well, we lose. If we do play well, we give ourselves a chance to win. So for us, we have to assess ourselves based on whether we played good basketball or not."

The Celtics are playing some incredibly inspired basketball at the moment. Friday's rally was particularly improbable considering the lineup most responsible for the surge. Not only were newcomers Thomas and Jerebko bookending the five-man grouping, but rookies James Young and Marcus Smart were on the floor along with Crowder. Stevens rode that group as long as he could before sprinkling starters like Avery Bradley and Evan Turner back into the mix.

"We knew we were going to come back and win it," said Bradley. "We played hard, and got stops, and continued to trust each other and believe in each other."

The 24-year-old Bradley is the elder statesmen on the Boston roster, one of the few holdovers from the Big Three era and someone who has at least tasted playoff basketball. He's not afraid to dream big.

"That's been our goal since the beginning of the year: To win games and hopefully have a chance to be in the playoffs," said Bradley. "And, after that, win a championship."

Championship? Stevens will settle for getting everyone's first and last names down at the moment and take it from there.

bob
MY NOTE:  iPads with new plays being updated daily?  Could you imagine Red's reaction to that?  I notice I never hear Tommy mention it even though I'm sure he knows about it.  It's a new world out there...Adapt or die.

Sounds as though Isaiah is definitely "all in."  So far, so good.