Isaiah Thomas is an artist on isolation plays

Isaiah Thomas is an artist on isolation plays

Isaiah Thomas is an artist on isolation plays
By Justin Danziger  @justin_danziger on Mar 2, 2015, 7:10a 6 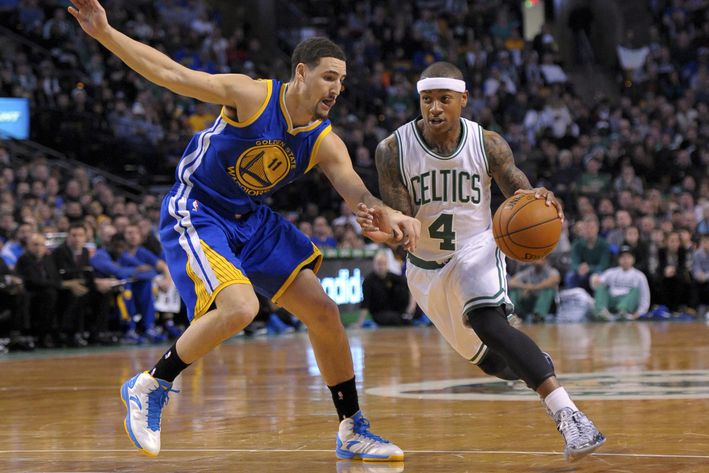 Bob DeChiara-USA TODAY Sports
Isaiah Thomas may or may not be a human being.

Since the trade deadline, the Boston Celtics have been rejuvenated.

It was just another example of Danny Ainge's voodoo when he traded for Isaiah Thomas, Jonas Jerebko, and Luigi Datome, only releasing Marcus Thornton, Tayshaun Prince, and a Cleveland pick.  Former Kings GM and coach, Jerry Reynolds, laughed when he heard how little the Celtics had to give up.

"That future Cleveland pick ain't going to be Isaiah Thomas. I can tell you that."- Jerry Reynolds

Now the Celtics are winning games, just half a game behind the 8th seed, and are playing fun basketball. Avery Bradley has a hot hand, Jae Crowder is filling his role well, and Isaiah Thomas is a superhero.

In his first four games, Thomas has averaged 22.3 points in 27.8 minutes off the bench.  He is so offensively talented that defending him is a chore.  You can't leave him on the three point line because he will knock it down given too much space.  But you can't play him too tight because he will punish you with a first step like a cheetah.  This is how Isaiah Thomas makes his money.

Isaiah attacks the basket fearlessly.  He is just 5-9, the smallest player in the NBA, but ranks among the best in scores off isolation and drives.  Watch as he beats his man off the dribble and charges at Al Jefferson-who is over a foot taller than Thomas-with the speed and determination of a Russell Westbrook or Monta Ellis.

Or here, where he nearly dunks on Gerald Henderson.

With the Phoenix Suns, Thomas was highly successful on drives off isolation, and he only turned the ball over 9.1% on all drives to the basket.  Ever since joining the Celtics, Thomas has ranked 7th in points per game off isolation, according to Synergy.

But scoring isn't the only result of an isolation situation.  Thomas also produces off of drive and kicks.  Isaiah constantly drives and looks to the perimeter for the hot hand in Avery Bradley and even newcomer, Jonas Jerebko.  Defenders tend to think that Thomas is only looking to score, and when they forget that they have lost their man, it is too late.

Through four games, Thomas has averaged 1.3 points per possession on ISOs, which would rank him fourth in the league.  When he doesn't score, he turns the play into free throws.  Thomas is phenomenal at absorbing contact, finishing, and getting to the line (his small stature makes the refs call fouls in his favor).  He converts 40% of his ISOs into foul shots.

Isaiah Thomas has been playing like a star.  Luckily, he is locked under contract until 2018, and if Ainge wants to trade him, he can be a valuable piece.  In any case, Thomas is an outstanding player, one who has been overshadowed and undervalued his entire career.


bob
MY NOTE:  "The Artist" had a creative block last night but in his last 5 games he has averaged, off the bench, 21.8ppg, 5.8assists and 3.4TOs.  He has also averaged 39% fg% and 32.5% from 3 on 16fgas/game.  He is, for sure, a high volume shooter.  He hasn't been a high percentage shooter, but he does hoist them up without hesitation (or conscience). What he could use is another killer scorer to take some of the pressure off him.

IT is going to thrive in Boston. He plays hard, even fearlessly, and Boston fans appreciate that. He seems to appreciate what playing for the Celtics means, already loves the atmosphere, and always says the right things. As a result, Boston fans and media are going to love this guy. We get a valuable player who can get 20 a night, and Isaiah finally gets some much deserved recognition. Never mind that his contract is an absolute steal for his level of production. Ainge nailed this one.

I've always been anti-isolation based on principle.  I don't like the style of basketball that is established with too much emphasis on iso ball.

So it's a great temptation for me to worry that Isaiah will carry the isolation thing so far that the rest of the team will lose some of its energetic edge.  (I've always said that that, when the highly competitive Celtics faced the highly competitive Lakers, the best thing that could happen for Boston was to have Kobe go off for lots of points in the first half because, in the second half, when a team effort was increasingly necessary in order to win, the rest of the team had difficulty getting back into the flow and rhythms of the game.)

But, despite my native antipathy for iso ball, I recognize that, at the Celtics' current talent level, Thomas in isolation is quite probably the best single offensive weapon they have.  I would be happier if a larger proportion of his iso plays eventuated in his drawing defenders and involving other Celtics with good passing.  But I rationalize that they're all still in the phase of getting used to one another; and, in the absence of a wholly established trust in his new teammates, Isaiah's doing what comes naturally by defaulting to iso ball.

It would be easy to criticize him, after last night, for relying on the iso game so much that it became predictably defendable and limited the potential contributions of teammates.  However, I'm coming around to the way of thinking that it may be appropriate to exhort others to come up to Isaiah's level than to hope his play can be adapted to their level.

In the process of development, there will be many imbalances that arise as new acquisitions arrive and other players leave.  The trick is to retain the best elements of those imbalances as the team jointly gravitates to consolidation at a high level of proficiency.